In which I come around to George W., kind of

I knew I shouldn’t have written critically about Obama yesterday. First of all, it brought me a comment I immediately had to trash; one of those half-crazed vitriolic things you find if you unwisely venture into the comments section of political commentary.

But, perhaps to tell me I have to give everyone the benefit of the doubt, last night I dreamt I was hanging out with George W. Bush – quite a waste of a dream. 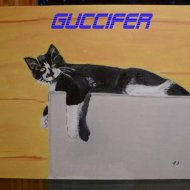 We were standing out side in the snow, for some reason. If he’d invited me in to see his paintings, I might have discovered, as I did this morning, that he paints cats as well as dogs and himself naked in the bath, and I might have given him even more doubt benefit. Who knew?

And this makes me wonder – is old W. getting more politically balanced in his retiring years? Time Magazine recently posted a political personality quiz where the first question has to do with cat or dog preference:

I find this wording a bit difficult, but what it seems to be saying is that liberals like cats.

The website of Luther M. Siler, author of fictional things

Because once you get off this road, there's just no getting back on