My week in retrograde

Saturday evening: huge branch falls from beech tree – the beech tree that used to look like this:

Our majestic beech tree, with a trunk you couldn’t get your arms around, a trunk that looked like an elephant foot, suddenly turned into this last spring: 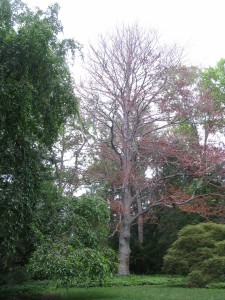 Sunday: call the tree guy, since wires are now conveniently down. All outside timer lights stop working – they decided this on their own, unrelated to the non-electric downed wires.

Sunday night, 3 am: There’s a loose metal plate on the highway we call the Blue Route that runs near our house. It sounds like artillery fire when trucks run over it; until now the sound of the massive air exchange unit across the street has drowned it out, but it’s cool tonight so it’s not on. We listen to the battle till 6 am.

Monday: tree guys come; I park car across street. This is what across the street looks like: 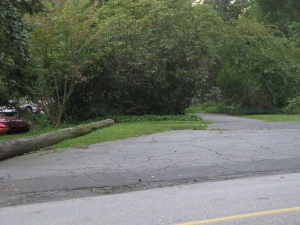 We park huddled next to that log, as we’ve done for 30 years when our driveway is blocked.

The people renting a college house at the end of that long (and unblocked) driveway call campus police. “Boot/tow” notice and $20 ticket arrive on windshield.

College police are very nice when I stop into their office; tear up ticket, say it’s fine for me to park there till tree guys are done.

I park there, so-called neighbors call police again, college tells me to move car (via voicemail, which I can only access by cell phone, of course. People calling get a message we’re on the phone – they all must think we spend a lot of time talking, as well as not blocking driveways). I’ve never laid eyes on these people, and I guess I have to hope I never do.

Spend an hour on cell phone with Verizon. They can’t come to put wires back up till Thursday. If strike hadn’t ended, they say, it would have been several weeks.

Monday night, 3 am: In between the trucks, I hear repeated beeping. Ironic, since the friendly little beep that happens when you lock your car has suddenly stopped happening when we lock our car.

Tuesday: tree guys aren’t finished yet. I park car across the street with note to college. Neighbors call police again. Fortunately, tree guys finish so I move car. Verizon guys suddenly show up, but turns out they’re copper, not FIOS guys. They leave. FIOS guys will show up later, they say. At 3:30. They’ll call me first on cell phone; if I don’t answer they won’t come.

Tuesday afternoon: Earthquake. I’m in my Italian lesson. We learn the word for earthquake – terremoto – as my handy cell phone rattles on the table.

Everyone but us has evacuated buildings; people are all crowded on sidewalks using cell phones that don’t work.

I change cell phone message to tell Verizon guys I’ll be there at 3:30; that if they’re hearing this message it means all circuits are busy (it’s sort of fun to tell Verizon that).

But my train finally comes, only 10 minutes late. I run home. No call, no Verizon guys, but at least the beeping mystery is solved: display panel on stove is displaying error message. Call stove repair guy; he comes to see what part he needs to order before he goes on vacation next week. Turns stove circuit breaker off.

No phone, no TV, no internet, no timer lights, no stove, no beeping car keys.

“Mercury must be in retrograde,” I say facetiously to my son.

“Mercury is in retrograde,” he says.

Retrograde is supposed to end this weekend, just in time for the hurricane. But things are already looking up – the FIOS guy showed up this morning!

And guess where he parked. 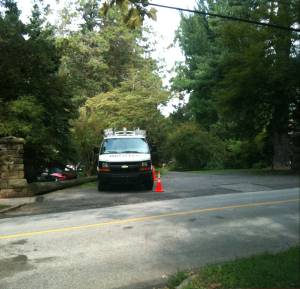 This entry was posted in Little things, My so-called-life, Technology and tagged Astrology, Mercury in retrograde. Bookmark the permalink.

4 Responses to My week in retrograde

The website of Luther M. Siler, author of fictional things

Because once you get off this road, there's just no getting back on